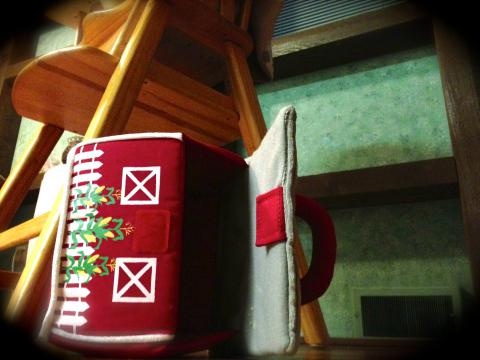 This is a photo that I took of one of the toy’s that Mateo always throws on the ground while Minnie and I are sitting at the table and eating dinner.

As a mental health counselor, I feel that I have a pretty good grasp one how to raise my son, and what to do. Something I feel like I explain to parents frequently when they bring their kids in, especially young kids, is that the majority of the counseling I’m going to do is with them. I explain that they are with their children and have so much more powerful of an impact then I ever could in the hour a couple of times a month I get to see them.

I feel like with my education and experience, I have been able to discuss some pretty sound points with parents and work through some issues well. That being said, as I go into raising Mateo, it’s like everything is an experiment right now. Hopefully Mateo won’t feel too much like I’ve been experimenting on him when he gets older, but I figure we are in it together to find the best solutions to everything that comes up.

A couple of nights ago, Minnie and I were sitting eating dinner and Mateo was in his high chair (already having eaten). He kept throwing his little barn on the ground. I decided that I didn’t want to pick it up every couple of minutes. I know that he doesn’t have the fine motor control to really manipulate objects and move things around very well. He also get super excited and starts flailing his arms around (so cute). I am not saying that I was upset with him, or even view this as anything but normal baby behavior, that being said, I did say I’ve been experimenting on him (not in any bad way). I decided that every time he knocks his toys off his high chair, I will pick it up. I will show it to him and tell him that he supposed to keep it on the table (pointing to the table) and then put it on our table for him to look at for about a minute (I tell him that I will give it back to him after a minute). He’s a pretty content baby and doesn’t seem to mind losing his toy too much right now. After about a minute, I give the toy back to him and explain again that he can play with it, but not to throw it on the ground or he will lose it again for another minute.

All that being said, it’s a pretty simple exercise, and some classical conditioning. It does seem to be working some. While he still throws it on the ground or knocks it over, I feel like he is more careful with it now, as if he knows that he want’s to keep playing with it. Like I said, pretty simple little thing… but it does give me a bit of the mad scientist feeling of trying to figure out what works best. I just figured I’d share…

Also, today is Mateo’s Six Month Birthday! We completed our monthly photo shoot so I will be posted a lot of shots on Instagram, so make sure you check them out.