You can read the downloadable version of this article. Levels of Leadership

I work with at-risk youth and their families at a short-term care facility. Most of the major issues that come up, especially during family sessions, are those relating to how people deal with other people. I would imagine this phenomenon of people-to-people issues is transferable to the rest of the earth’s population. My pastor one time commented that life would be a lot easier if it was not for all the people. Leadership and our interactions with other people and ideas are always interrelated.

Most people do not recognize all the leadership opportunities in their lives, or even view themselves as a leader. Each and everybody person is a leader to a degree and can improve their skills at leading. If dealing with other people is one of the major issues of the human race and it can often be defined by leadership, then it makes the topic of leadership a paramount one that everybody ought to examine. 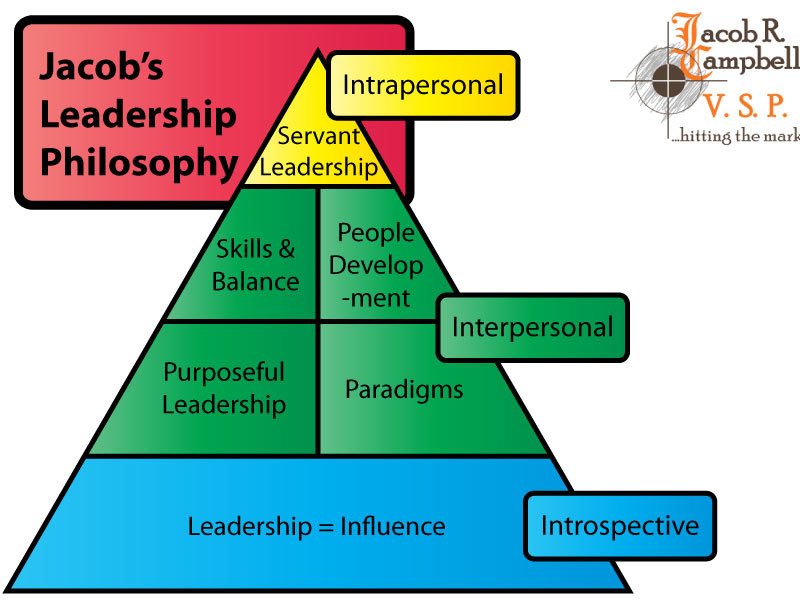 My leadership philosophy has three levels. Those levels are introspective, interpersonal, and Intrapersonal. The introspective deals with how we deal with ourselves and includes evaluating our own paradigms and being a purposeful leader. The major underlying paradigm is that leadership deals with influence. The interpersonal level deals with who we deal with other people. This level includes leadership/people skills, being a balanced leader, and people development. Finally the Intrapersonal level deals with people being interdependent and is really more of an outlook on life. The this outlook on life is that of being a servant leader.

Each and every person has different paradigms they have formed during their life. These paradigms as formed by our experience, context, basic/complex beliefs, and genetic factors in each of our lives. Each of these paradigms colors how we see the world and choose to interact with it. Some of these paradigms revolve around our concepts of people-to-people interactions. People who are effective in their lives tend to evaluate the paradigms that form the foundation for how they interact with the rest of their life. Apart from contending with who they are and why they do what they do, and if they ought to continue to be that way. There is also a need to evaluate how effectively they are doing what they say they want to do.

Blanchard and Hodges (2008) leadership in the most simple and in my estimation valuable fashion. He said that a leader is anybody who has influence on somebody else. Many people’s views of leaders are contrary to this concept. Often people think about leaders as being people in positions of authority and having managerial control over them. Last year, I put on a campus-wide leadership conference in which I brought in three guest speakers to talk about leadership. The entire conference was about the underlying ethics of leadership. Chief Judge Dennis J. Sweeney J.D., L.L.M. for the Washington State Court of Appeals Division III came and spoke about leadership and public service. In preparing for the conference, I was meeting with Dennis and talking about concepts of leadership. He questioned why I had asked him to speak at the conference, and described that he did not feel much like a leader. He had a similar view of positions dictating who a leader is. Anytime that we have any influence on another person we are being a leader. Social workers have these types of leadership opportunities very often.

The third component of the introspective level of leadership deals with the leader acting purposefully. If it is indeed true everybody is a leader, it would seem logical we ought to be purposeful in our interactions. Blanchard and Hodges (2008) described how we can be leading others without knowing we are. He used an example of him being a father. They also described he would be influencing his children regardless if he was purposeful in his actions or not. This is true for us to, we can choose to be purposeful in our interactions or not, either way, we are still leading. This also deals with self-evaluation and personal growth. Covey (1989) includes what he calls sharpening the saw as one of his seven habits of an effective leader. A purposeful leader is consistently evaluating where they are so that they know what they need to do to accomplish their goals.

Effective leaders also have skills that they implement. Books on leadership tend to focus on two different components of leadership. One component is the why. The other is the how. Many books talk about specific skills, especially people, evaluation, or managerial skills. These are important to factor in leadership. They include some of the following, but are not limited to these; personal care/renewal, listening, clear communication, and micro skills. These are an important component of the interpersonal level of leadership.

Being a balanced leader, while being a specific skill, is larger than just implementing leadership skills. Being a balanced leader also coincides with being a social worker. Social workers function in a variety of different roles. They have to be able to wear all the different hats that are given to them. They are expected to be able to deal with crisis’ and put out fires, but they are are also supposed to be visionary and find ways to limit or put boundaries on fires. The Timothy in the Bible, in talking about preaching, that they were to be “instant in season and out of season” (2 Tim. 4:2 New American Standard Bible). While he was speaking directly about being able to preach the gospel at any time, leaders must also be able to operate at any time.

I do not believe that a top-down leadership style is effective management. I believe it is somebody who is in a leadership role’s job to find peoples skills and allow them to operate as freely as possible in those skills. It is not a leader’s job to simply dole out commends for every task and be in the job of micro management. People within an organization must be into the job of supporting the people they work with and helping them to be better equipped to handle the situations that come up in their work. This introduces the need for people development. The second year I was involved in the Master’s Commission, a leadership training discipleship school, I was an intern. I had a number of projects which where my projects. Among other tasks, I was put in charge of the distance learning curriculum and the large amount of tools we utilized for work projects. In both of these positions, I was given free rein to do what was necessary for them. This did a number of things for me and for the organization. I took ownership of those aspects, and evaluated what was important to make these components run the way I thought they needed to. It also gave me the freedom to examine how they were done and allowed me to make some improvements. Had my supervisor not given me freedom, these changes would not have been made.

One important characteristic of a leader is that of being a servant. A leaders job is not to give orders. This concept of servant leadership is really a paradigm or an outlook on life, and not only something somebody does. It is the difference between a leader thinking about the people he is leading as being there for him or is he being there for the people he is leading. This concept of servant leadership goes both up and down the chain of command. The leader should be serving those that work under him. The leader also ought to be looking out for their boss’ best interest. Evaluating what needs to be done, giving choices/opportunities to the boss, focused on helping the boss present well / move up, attempting to help them avoid pitfalls.

Formulating our personal leadership philosophy is only the first step. The second step involves the rubber meets the road so to say. It is about taking the various philosophical concepts and applying them to our lives and judging how we meet up. This component is even a part of my leadership philosophy and being a purposeful leader.

The area that I need the most growth in is in personal development and people development. One concept that I believe in greatly and have practiced in the past, just not recently, is mentoring. While I do act as a mentor often for the youth that I work with, I feel it is important to have more mentorship in my life. I believe people are best improved with the following system. First, they ought to be being purposefully mentored by somebody. This is somebody who will hold you accountable, who has already journeyed the road you are traveling and will help you to get further down the path (notice it’s not the end because it’s always about moving on and not stopping once we reach a destination). Second, they ought to be mentoring others. If we expect to be mentored by somebody, it only makes sense to mentor others. Also, sometimes the greatest learning opportunities and happen as we teach and work with others.

The process of learning about leadership has been a difficult and productive one. I remember one speaker we had come to the Master’s Commission. He was talking about ministry/service/leadership. He described the learning process being like fitting through a knot in the fence. It is often a long process of looking through the hole and seeing the end result. Knowing where we want to be, but it’s like a weight room and having to fit through the hole. He described these leaders as seeming to be really effective and shining in front of everybody, but we don’t often see what they have had to do to get there, and the hours of work they had to put it.

Leadership as a concept, especially (maybe I’m a bit biased) when taken as described above, is a very important topic to be learned. If everybody followed examined himself or herself and strove for some the qualities above, I believe the world would be a better place.