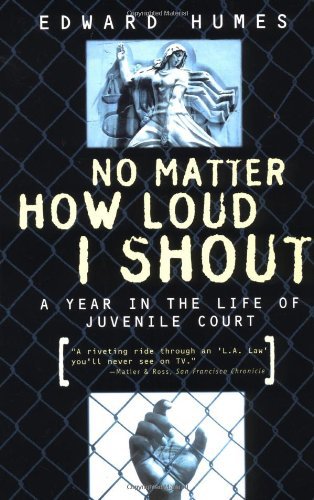 You can read a downloadable version of this article: No Matter How Loud I Shout Book Review

No Matter How Loud I Shout: Book Description

Humes (1999) was granted unprecedented access to the juvenile courts in California. The juvenile court system is closed to outsiders and often seems secretive. The juvenile court system encompasses a large number of youth. In California, there are 30,000 juvenile delinquency cases brought to court each year, 26 juvenile detention camps with some 4,400 youth, and 8,700 juvenile prison wards. The courts only have four basic sentences they can give to juveniles; (1) HOP (home of a parent); (2) suitable placement (a network of public and private foster homes); (3) juvenile detention camps; (4) juvenile prison. This gives only limited options to how a judge can sentence a delinquent youth.

Humes book describes the various aspects of the Californian juvenile justice system. It moves around the stories of seven different teenagers involved in the court system. He also has in-depth look at some different judges, their views and courtrooms. Along with the judges he provides stories that involve attorneys, probation officers, youth, delinquents, families, social workers, teachers, and many others that come and go through the lives of the teenagers. It is all set up in storylines that intertwine together to give the reader a picture of the court system.

Working with a diverse population requires the social worker to examine aspects that make up the population. To fully examine a population, a few of the aspects that should be researched are as follows; best practices for working with the population, cultural background, tradition, norms and values, history of oppression, types of support, family dynamics, spirituality, and body language. The stories that fill Humes book come and address each of these aspects at different points.

Working with a diverse population requires the social worker to examine aspects that make up the population. To fully examine a population, a few of the aspects that should be researched are as follows; best practices for working with the population, cultural background, tradition, norms and values, history of oppression, types of support, family dynamics, spirituality, and body language. The stories that fill Humes book come and address each of these aspects at different points.

The culture that these juveniles participate, the street/gang culture, is one that has a lot of facets to it. Each of the delinquents live their life based on this culture. The street/gang culture is portrayed to have very strict unwritten rules and is enforced by other juveniles. For example, the juveniles couldn’t let others disrespect them in any way and let them get away with it. One of the juveniles mothers questions how her son could believe that “the lesser of two evils was to participate in murder rather than risk being jeered by his friends” (p. 212).

This street/gang culture has specific traditions, norms, and values. The process for a juvenile to become involved in a gang often has a tradition the youth must participate. Often this is some sort of jumping in and some sort of crime. For example, one of the youths had to commit a robbery with some of the older members. If a juvenile is a narc (slang for narcotics officer, but often used to describe somebody who tells the authorities about some illegal action) there are often stringent penalties enforced by their peers. They have a strict not talking to the authorities lifestyle. Humes describes that in some of the juvenile prisons the youth were victims of beatings, gang fights, stabbings, assaults, and even rapes, but because of this norm, they were not reported. The street/gang culture values respect above everything else. This is why the aforementioned youth would rather be involved in a murder then be disrespected.

In re Gault (1967) was a changing point possible recourses for juvenile judges. Gerald Francis Gault, who was fifteen years old, was arrested for allegedly making an obscene phone call. Gault was on probation and the police did not leave the notice with Gault’s parents, who were at work when the youth was arrested. Gault was committed to the State Industrial School until he reached the age of 21 for the offense. The Supreme Court decided that the courts were not complying with the 14th amendment. This action limited the courts but also shows an example of how juvenile delinquents have been oppressed in the past.

The juveniles are shown to have an expansive support system. The quality of the support offered seemed to almost always fail them though. Many of the juveniles portrayed in the book come from families that are less than supportive. Once the juvenile is in the system there are a number of supports that are meant to help them. These are described as having too high of caseloads and responsibilities to be effective at anything.

One support that is not external, but that is internal is spirituality. Although spirituality is not important to all of the incarcerated juveniles, Humes describes many that come to religious convictions while incarcerated. Spirituality is also important for some of the portrayed workers, for example, Sister Janet Harris who works at the juvenile detention out of her religious convictions.

Incarcerated adolescents have a few body language characteristics that seem to be fairly common. Many of the youth are portrayed as being stone-faced while they are in court, or dealing with authority figures, giving an “I don’t give a f_*_” facial expression. They are also often described with aggressive body language. There are also times that the opposite is true and they are shown very broken and hurting.

Putting it into Practice

Any study in social work should contain some sort of application, and looking at Humes’ book should be no different. In looking at all of the various criteria for working with diverse populations, it seems to dictate some different ways of working with juveniles. First, it seems that one of the largest needs is to work with juveniles is their environment. Continually Humes goes back to the concept that these gang bangers all come from and go back to the same sort of environment. Second, it seems that the worker needs to find ways to gain adolescents respect. Finally is also a need for firmness and structure because this is what they often grew up without.

Further then looking into what needs to be done, an analysis must also look into the validity of the information. Humes book is, although from many different aspects, very subjective and case studies of individuals. Within these individual stories, there is a large amount of statistical backing showing it to be true for major parts of the population. The book is lacking in description of opinion for what are the best practices for working with juveniles, so the reader questions if Judge Dorn’s ideas are the most effective and no true evidence is given to support them. It seems to give a good picture of what the juvenile justice system looks like, a broken system in need of substantial change.

Humes, E. (1999) No matter how loud I shout: A year in the life of juvenile court (School & library binding). New York: Tandem Library.