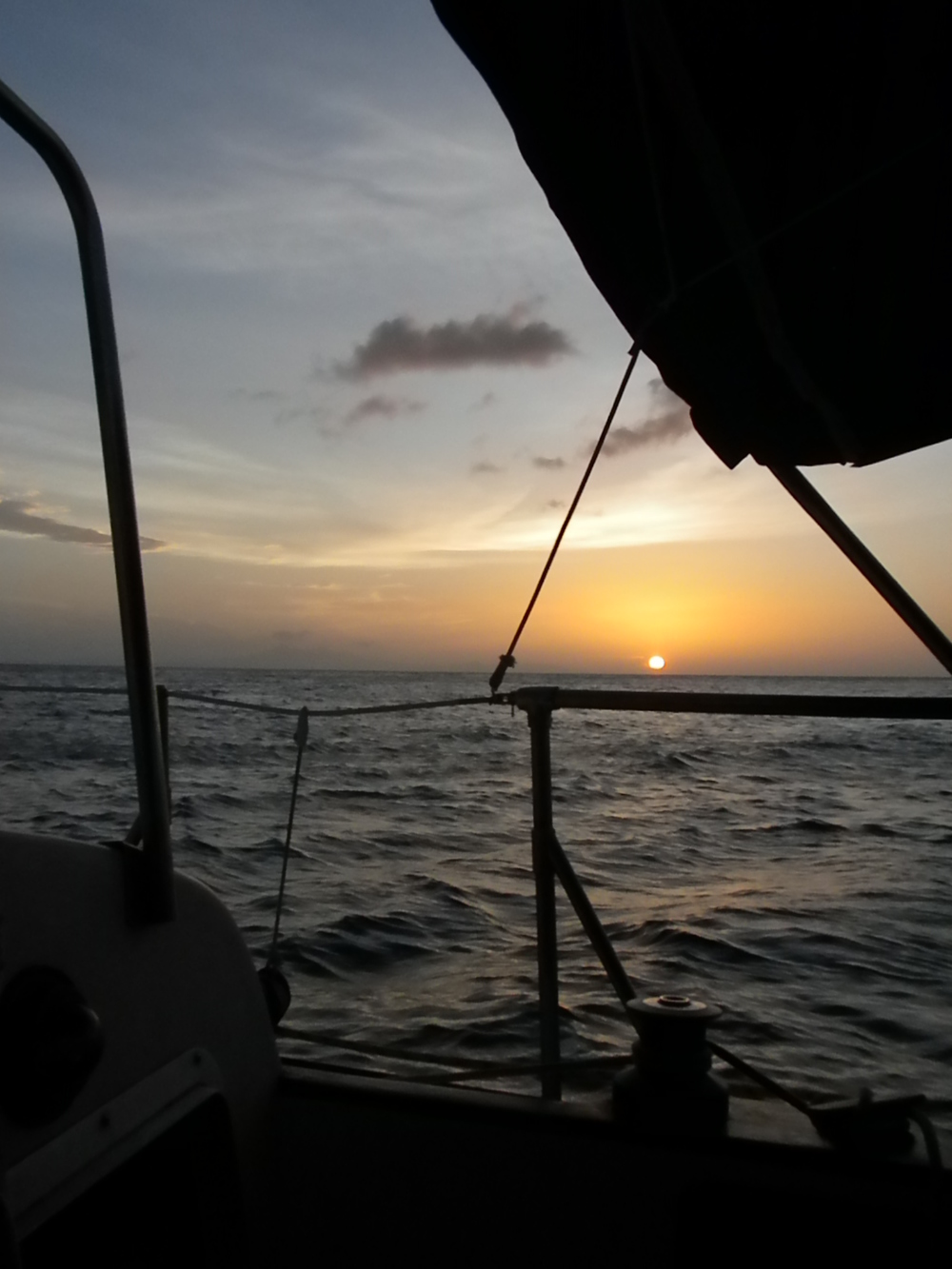 Sunset Off the Yacht

As I briefly described in the last post, we got the opportunity to go on a small yacht. This was a pretty phenomenal opportunity. It also meant that Ami got to celebrate her birthday on two separate days (something that I don’t think I will get in return). A guy named Gorden (originally from Great Britain, and having retired on his yacht for the last 15 years) took us out. Michael (the hotel owner) and two travelers from England (Son & Ella) all went out. I decided that I’m not a sailor by nature (so maybe I’ll have to practice and I’ll get there). While I didn’t puke, I did get very noxious both going and coming from Islas Los Frailes (about a 4 hour sailing trip there, and 2.5 hours coming back). When we got there, I burnt my back getting lost snorkeling. There were bits of coral, amazing tropical fish, and beautiful countryside/water. After I and especially Ami were thoroughly burned we got the opportunity to play with some scuba gear for a short period of time. It reminded me of my days wanting to be an underwater photographer and wanting to become certified to dive. We ate some chips and corned beef to sail with the wind at our backs and the sun setting beautifully over the oceans expanse. When I tried to sail, I got the boat to spin to donuts (on purpose, I swear). Gordon gave us some jungle homemade wine, told us sailing stories (both about women and the sea), and felt the cool ocean breeze. When we got back, I went and bought Ami a Tarta (A kind of cake). They turned the lights down low, everybody at Hotel Patrick sang happy birthday to Ami and her extinguishing candle. 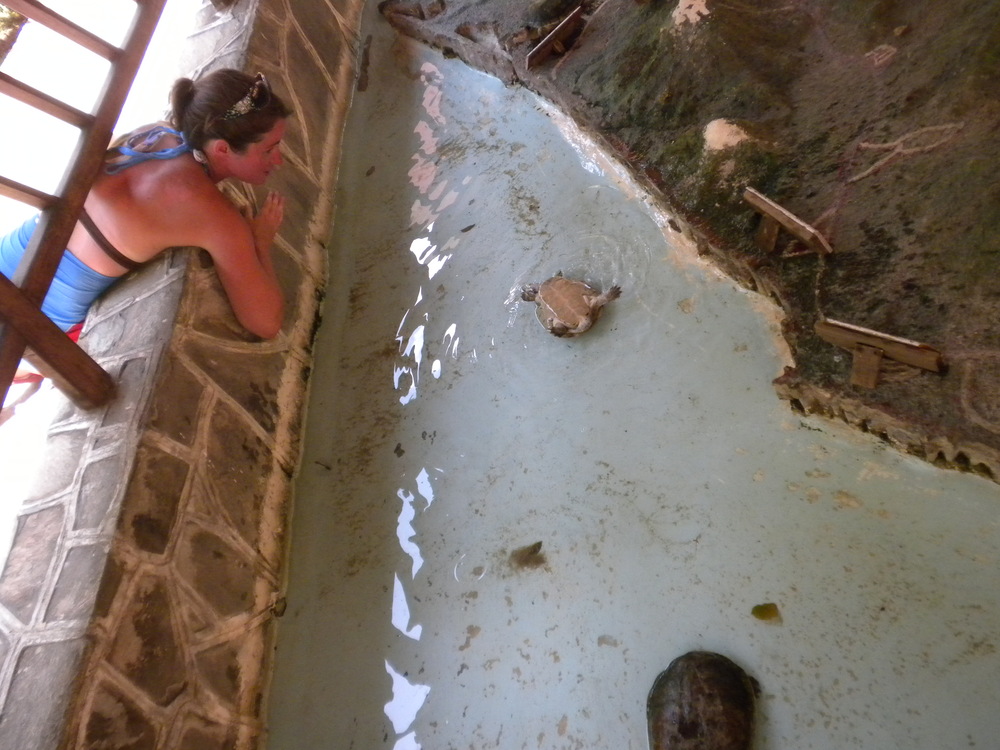 Ami trying to flip over a turtle.

The next morning, we made our way to La Asunción, the capital of the provincia that we are in. It’s a quaint Spanish colonial town. We got to see the museum, the oldest church in Isla de Margarita, and some neat art work. We also got lost looking for our next bus and ended up getting picked up by some nice locals (kind of hitch hiking…). We went to Playa Agua, a very long beach that is on par with the same in California. Although we didn’t make it to the beach. We went to Palm Beach Hotel and met up with some fellow travelers we met on the ferry, Daniel and Bine. They are an awesome Austrian couple where were ending their trip. They had an all inclusive stay and ended up continuously brining us drinks for Ami’s birthday (number 2). After that, we made our way back to Hotel Patrick for a fresh fish dinner. It was so amazing with potatoes and onions. We hung out with everybody, talking, dancing, playing some games… a pretty great night.

Today we relaxed, finalized some of our plans (we are heading to Ciudad Bolívar Venezuela and then to Manaus Brazil). We went to Polamar to get our ferry tickets, hung out and looked at the local shopping, drank tea, and came back to Hotel Patrick. We had to say good bye to everybody because we are leaving early in the morning (speaking of which I ought to head to sleep here in a couple of minutes. We will both miss being here at Isla de Margarita and the Caribbean.

I’ll apologize straight off, I wrote the majority of this post several days ago, but we have mostly been without internet. Currently I’m in Santa Elena Venezuela. It’s interesting that we are in an area called el fronteira (the frontier). It’s not a tiny town, but it is small and in the jungle. It’s also very beautiful.

After leaving Margarita Island, we took a ferry which landed us in Porta La Cruz. We were immediately able to catch a bus heading down to Ciudad Bolivar. We spent the night at a place called The Ritz (a very sarcastic name). It was a fun place to stay. We met a missionary there named Raul and had some pretty awesome broken conversations. The next day we went to the botanical gardens (but mainly walked around the park. As it started to get dark, we decided that it was time to try to get our bus down to Santa Elena de Uairen. It was a 10 to 12 hour bus ride… but I at least got some sleep.

We are staying right now in the Hotel Michelle. It’s a pretty nice. We went out last night to try to go dancing… but there weren’t as many people as we would expect on a Friday night. Today we spent time thinking about going to some waterfalls, but had trouble finding the bus that headed that direction. All and all it’s been pretty amazing. We are hoping that we can get our visas on Monday and head into Brazil. Hopefully when we get to Manaus there will be wifi and I can upload pictures and spend more time updating everybody.