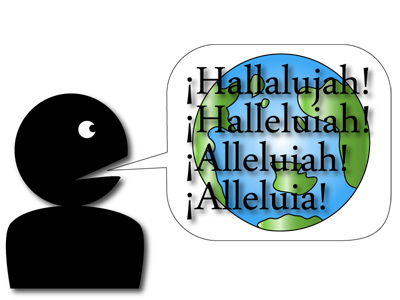 A graphic I created in Adobe Photoshop with the hallelujah in different languages.

I’ve been living in Cusco Perú now for about two months (I believe a little bit longer). I haven’t really posted anything since getting to Cusco. My camera is still broken, so I don’t have any new photo’s for you yet. I hope that it will be out of the shop soon, although I don’t know if I currently have the $130 to pay for it for a couple of months.

While I’ve been in Cusco, I’ve done a number of things. Due to the focus of this post, I’m not going into all of the stories for these… but let’s just say I have a lot of stories to tell. I have…

Really all and all I’ve had a lot of other fun experiences. I really enjoy Cusco, and have been happy with my decision to make my camp here.

Now, one thing I haven’t done yet (and and hoping to) is take Spanish lesions. While I haven’t taken any formal Spanish classes, every day is a Spanish lesion for me. Whether it’s hanging out on the corner with the ladies who sell massages / tour packages or going to my church, I am always getting the opportunity to practice my Spanish. While there are a number of words which are very similar in English and Spanish, I don’t know of very many that cross the span of more than a couple of languages. I was sitting in church today, and it hit me that one word that I believe is universal is halleluiah.

When I was in Africa on my mission trip, the pastors would often get the congregation “riled up” by shouting BWANA ASIFIWE (praise the lord in Swahili). The congregation would shout back HALLELUIAH. The pastor would do this a number of times. While, I am not a master of languages and certainly do not know if halleluiah is pronounced the same in all the languages of the world I would guess that it might just be. I am fairly sure that I heard it in different nations in Europe, in Swahili, and in Spanish.

Doing a little bit of research, I understand that the word translated from Hebrew is Hallelujah – or Praise Jah (Jehovah) and translated from the Greek is Alleluia having the same meaning. Both are commands to praise the Lord.

I just found it very interesting that there would be this one command, to praise the Lord, that is so significant and not in other languages that it would show up the same in so many different cultures and languages.