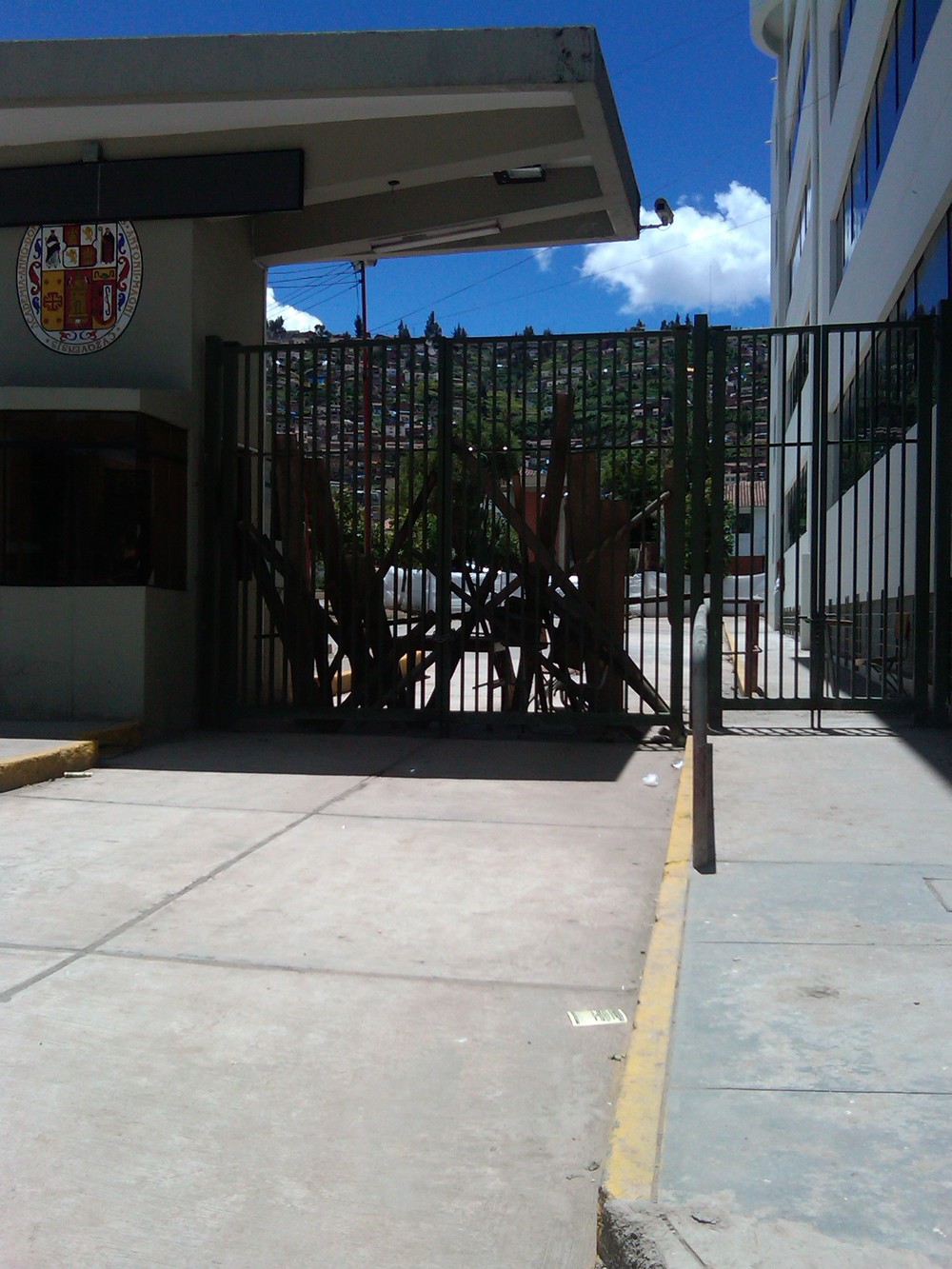 Blockade made by students at UNSAAC

It’s not uncommon for teachers in the United States to go on strike, but I don’t believe I’ve ever heard of students doing the same. In Cusco Perú, it does seem like there are a lot of protests (when I was spending more time down at the main square, it seemed almost every day). Even seeing all of these protests, I was prepared for the students to go on strike at the National University where I work.

One may question how all of the students at a university might go on strike. Well, at UNSAAC (Universidad Nacional de San Antonio Abad del Cusco) the university is surrounded by a giant wall with only a couple of major gates for people to enter by. The students took anything they could find (i.e. chairs, desks, large logs) and propped them up inside the gate making them inoperable. Furthermore, they added their own chains and locks to the gates.

The students were protesting saying that the school was using biased and illegal hiring tactics. As I understood the argument, the students said the administration was not hiring the professors based on their skills / qualifications, but rather based on relationships (i.e. family, friends… etc). I was told that this was illegal for the university to do here in Peru. I just found it very interesting the university students here would take the time to protest these illegal hiring practices.

Jacob Torres Goes to The Hospital 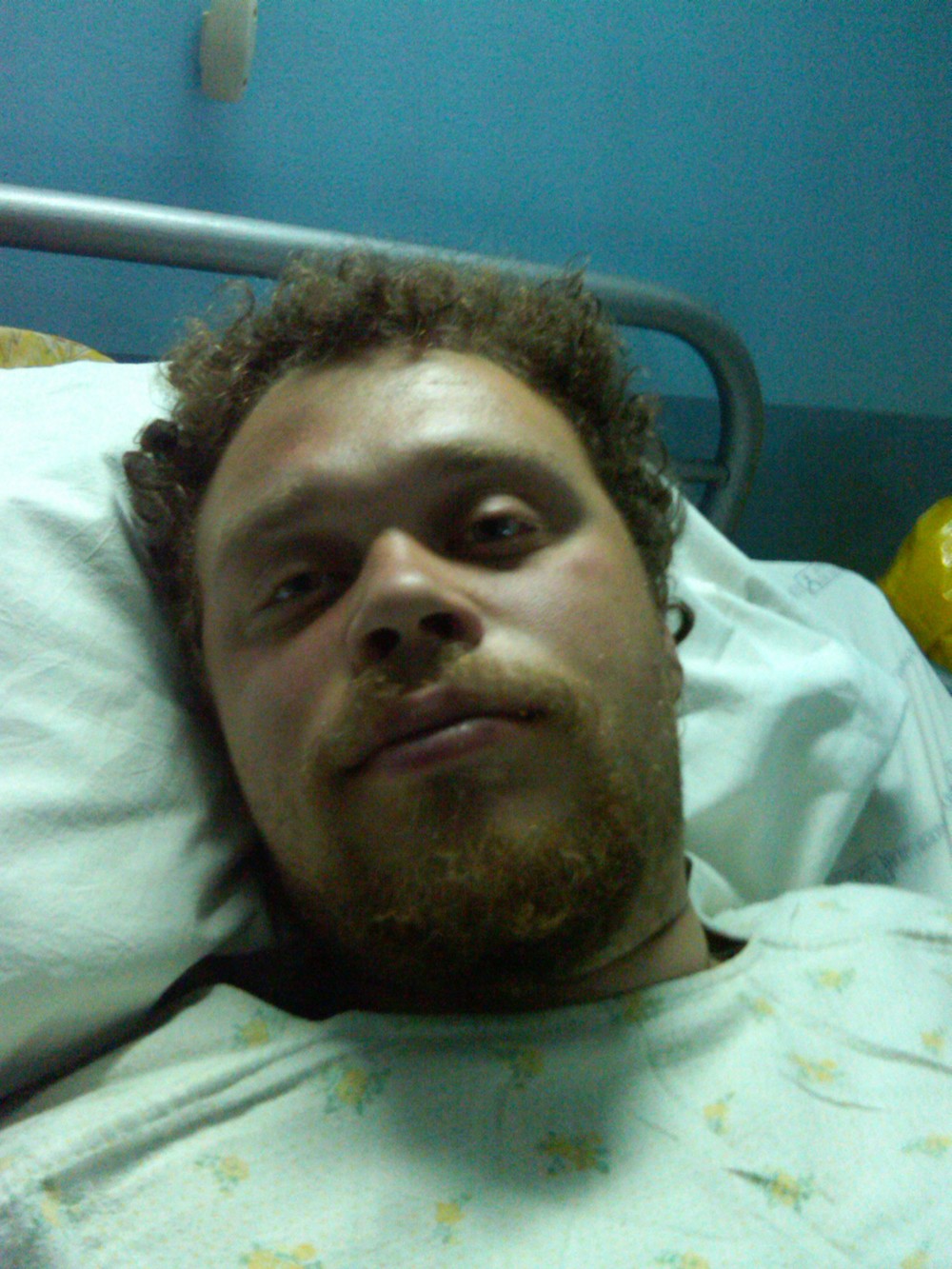 Me sitting in the hospital

I tend to think my Spanish has gotten pretty excellent in the last several months of being in Peru / South America. But I guess being in significant pain, tends to make pronunciation more difficult. Late last Monday, I had a guy couchsurfing at my place. I went to sleep about midnight, but woke up just a half hour later with extreme pain in my abdomen. I didn’t know what was happening. I tried doing anything I could think of for the next two hours, but it just kept getting worse. Add to that some nausea, and I was ready to go to the hospital. I woke my couchsurfer up, and told him I had to go to the hospital. He ended up just sleeping at the house while I went. Finding a taxi at almost three in the morning was a little bit difficult and I had to walk for a ways.

Peruvian hospitals are interesting. They require you pay for everything in advance. So, when I walked into the doors I paid S/. 10,00 (a little over $3) to have a consultation with a doctor. Through out the night (I didn’t end up leaving the hospital until about 1:00 pm the next day) I had to buy medications several times. The processes is you go to the pharmacy, who prints out a typed list / cost of the items you need. Then you go to the cashier to pay for the items. After words your return to the pharmacy to receive your items. At those hours they are all asleep too, so you have to knock and wait for them. Lets just say in extreme pain, this is not a fun activity. After receiving your medications, you return to the doctor so they can give them to you.

There is also no computerized intake process, and each area of the emergency they have to fill out new pieces of paper. At one point, I was asked what my last name was (which so far, I’ve seen spelled as the following: kambel, campbett, and cambell) and I attempted to spell it out. When I saw what the nurse was writing I told her it was all incorrect (todas es incorecto). She took that to mean my last name was Torres. I was in too much pain to change it. The thing is, that this is the name that went onto my form for my ultrasound (I believe that’s what it was), the first piece of paper I got to start carrying from doctor to doctor. I started having to consistently tell the doctors why it said Torres on my paper and not Campbell.

The next afternoon I left feeling much better (I’m sure a little high from the drugs) and super hungry. I was told that I ought to come back if the pain returns and that I should stay away from greasy food. The diagnosis was that my gallbladder was enlarged, and possibly had stones. They told me if the pain continued I might have to come back for surgery. I couldn’t do anything at that but laugh.

You must know, I have not had many surgeries in my life. Well, other than this one… just one. The other one was an appendectomy. The circumstances for this were a bit strange. I was 12 years old when it decided to happen and on vacation in Mexico. I must say it was quite an experience to have surgery done in Mexico. It seem ironic my only other surgery would happen outside of the US.

On Thursday the pain was back, and too much too bare again, so I went back to the emergency room. I was seen and given some medication, being told to come back in the morning at 5:00 am for surgery. I only made it until about 10:00 pm that evening. The pain was too much, so I returned and spent another night at the hospital.

My gallbladder was removed without complications, unless you consider the hospital loosing my shoes a complications (it’s funnier if you know how much problems I’ve had with shoes in South America). I’ve been in the hospital for the last couple of days. While, the hospital is not as nice as those in the US or have as many accommodations… it has been just fine. It’s also considerably cheaper. While I haven’t been released, so I don’t know my total bill, I was told to expect about $100 or less. Maybe the health care system in the US should take some pointers from Peru for how to keep costs down and make doctors visits more affordable.