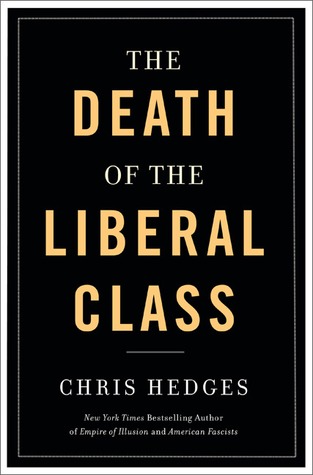 As I generally do, I was listening to National Public Radio (my driving companion when I’m not listing to gangster rap) and I first heard a story Hedges Laments The ‘Death Of The Liberal Class’. I was struck listening to Hodges talk about his life and the liberal class. It was a soon after that that I ended up being at Barnes & Nobel and quickly bought the book when I saw it. You must understand that this is about a year (I don’t know why it took me so long to read it, it was really good), and I was spending a lot of time at anywhere that had wireless internet.

I started reading it for a while, and then I put it down for a while, but kept picking it back up. Don’t let the fact that it took me a year to read cause you to believe that it’s not a good book. It was very engrossing, educational, and inspirational in its own way. He goes from describing what the liberal class was originally, to how it has been dismantled and loss of the processes which used to inhabit and permit the class. My favorite chapter is the one on liberal defectors, because I feel it is always so powerful to hear peoples stories. The final chapter is about titled rebellion and encourages the reader to rebel against the system.

Other then the topics and information of the book, I especially enjoyed Hodges vocabulary. The following some of the words that were new to me (although in my little book there were a lot more that I wrote down):

While there is a lot of people much smarter then me that discuss what the significance of the Dry Bones Prophesy is in Ezekiel. I’m not claiming that God was talking about the liberal class (although that is kind of a funny thought due to how conservative some Christians appear to be. But I do think it is a very visual scene that could portray where the the liberal class is as Hodges describes it.

It is a book that I would highly recommend to read. I think it is timely right now, too. While it was written prior to the Occupy Wall street Movement but I think that it is along the same lines.