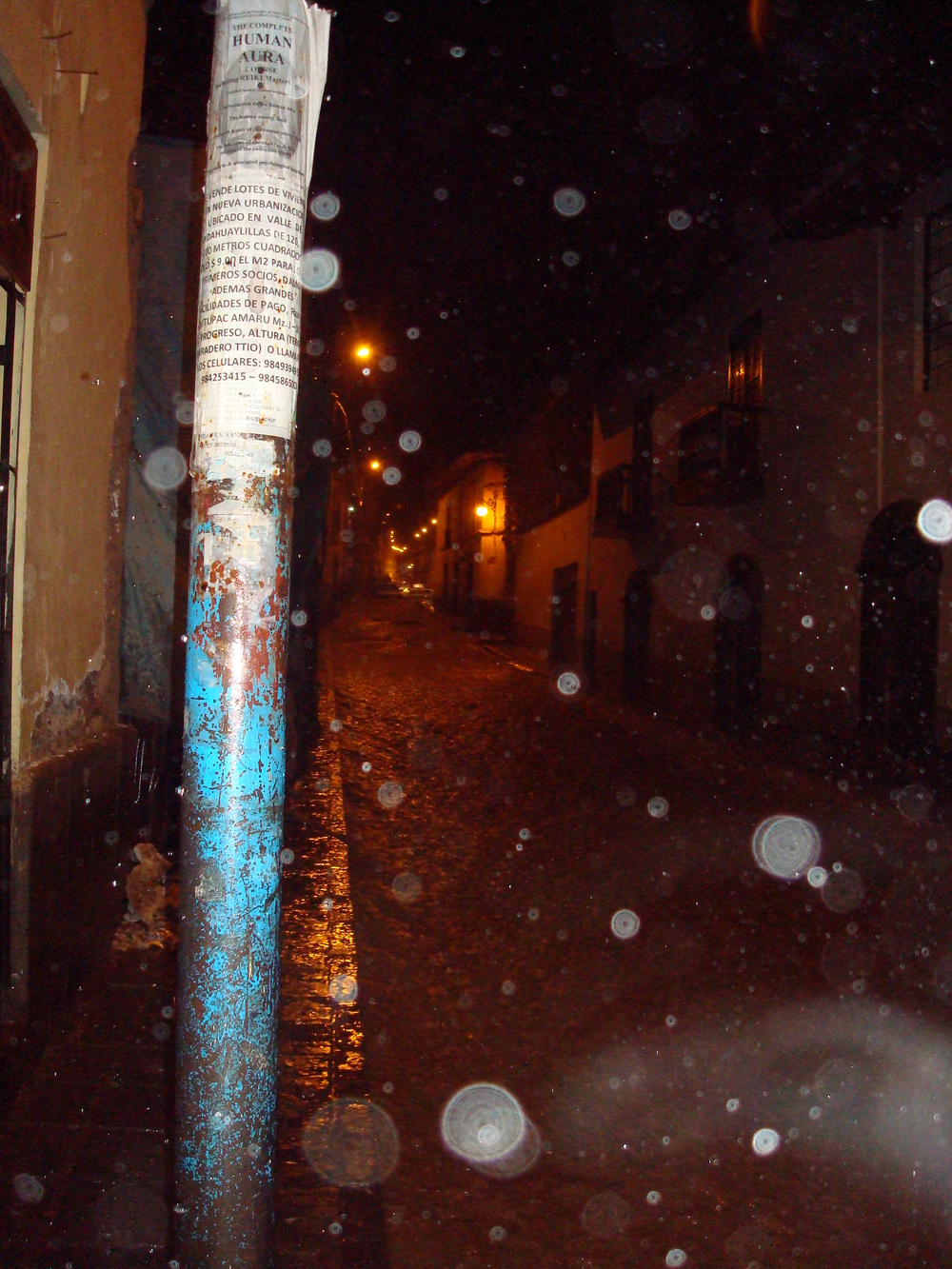 A photo taken by Ami while were both still living down in Cusco Peru during my travel experience of my Jaunt Down South 2010 . It showcases how during the rainy season in Cusco Peru, the rain really pours down and the streets turn to rivers. During the peak of the rainy season (i.e. December to February) it can have an average of 133.9 inches receiving 401.7 inches of precipitation of the expected annual 707.8 inches per year in just those three months. Read the Wikipedia Article for more information regarding Cusco’s climate .

In my second year at Columbia Basin College earning my AA Transfer Degree, I remember being in stress management class. I believe it was the first time that I was exposed to what I have heard over and over in my professional life regarding stress. He discussed a concept of clustering. This could be referred to as chronic or complex stress. This clustering is when an individual experiences a number of stressful events all near the same time period. Both in my life story and so much more in my experience working in mental health over the years, I can really see the truth and frequency that clustering happens.

Over and over in my interactions with my clients, I’ve heard them discuss complex stress even when they don’t understand it as such and only see it as a matter of their daily lives. Working with Medicaid clients and the severely chronically mentally ill at Tri-Cities Community Health’s Behavior Health Services Department (Neuva Esperanza Community Counseling Services), unscientifically I would propose that majority of our clients are experiencing the most complex trauma and stress. In thinking about it, I realistically don’t have any client who is only experiencing one major concern in their lives. Their lives tend to be series’ of crises and other problems. As a clinician, it can often times be difficult to discern what their underlying needs are or what issue to work on first.

Life and Its Constant Search for Balance 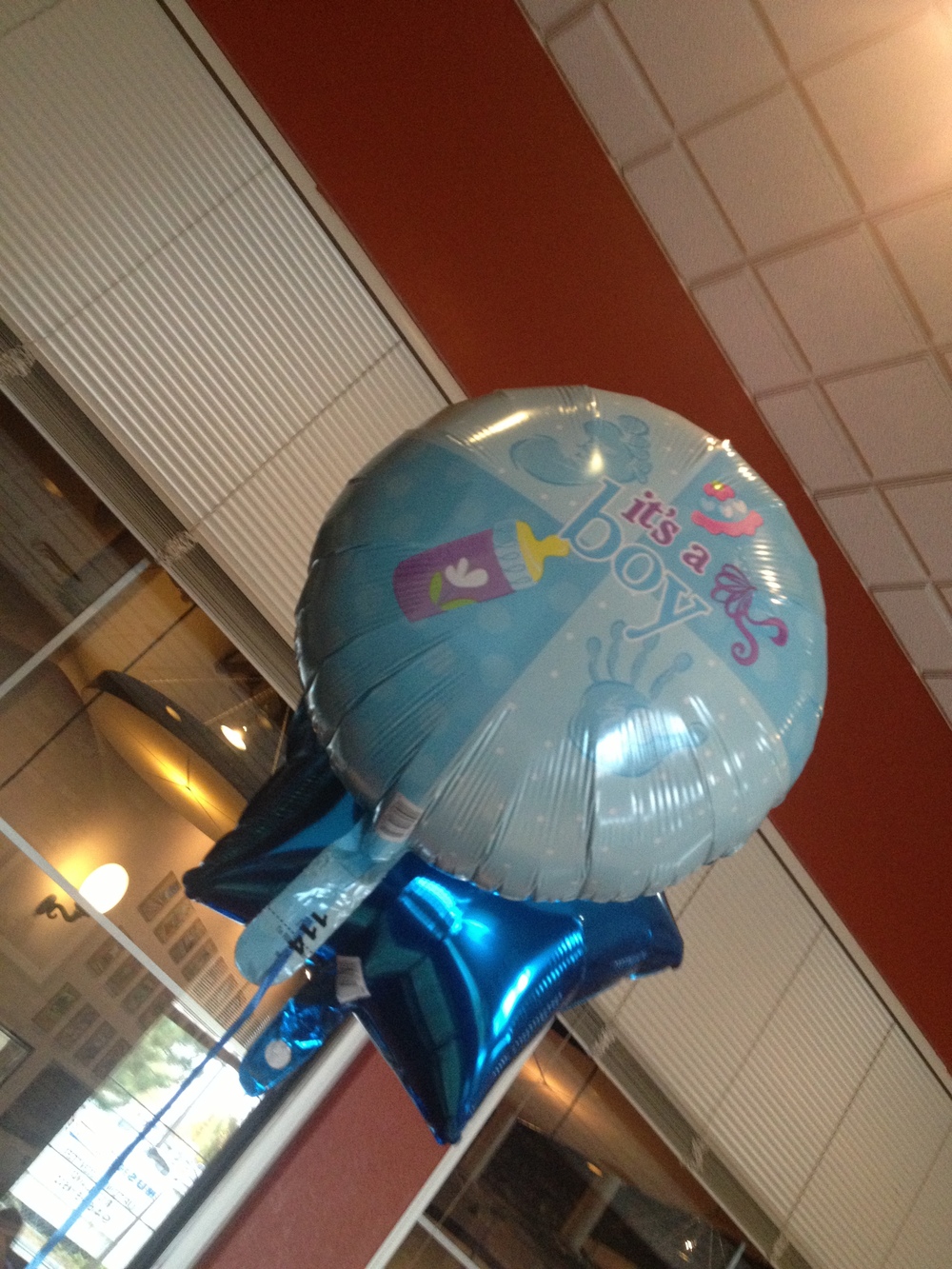 A photo taken at Tony Romas for our Baby Shower. You can check out the photo album, It’s a Boy! Family & Friends Baby Shower. It displays a photo of a balloon that was at our baby shower with the words “It’s a Boy” written on it.

On Saturday, October 13 Minnie and I were at Tony Romas celebrating the life growing inside of Minnie and getting ready for our baby boy that is expected to come in January 2013. We were completely focused on celebration prep and all of the friends and family that would be attending. I made these pretty snazzy invitations in Adobe Illustrator. 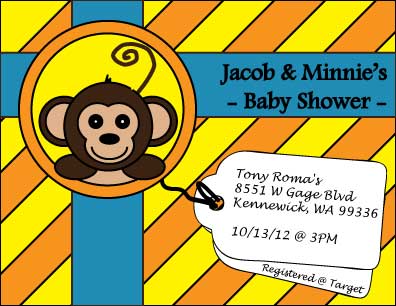 A graphic I created in Adobe Illustrator. This is one of the first graphics that I have ever created completely free hand without importing any other images. The front of the postcard displays a monkey I drew using shapes and merging them using the pathfinder function, two tags that state the event details and our registry. It is all designed to look like a gift with colored geometric design in the background and ribbon. There is a back side to the postcard that you can check out and I have uploaded the Baby Shower Announcement Postcard Front Adobe Illustrator File so that you can see more of what I did. 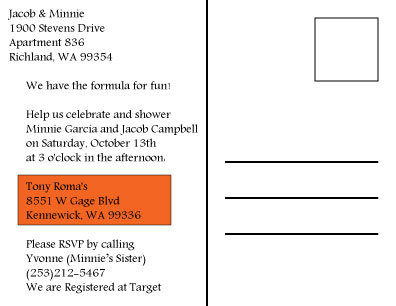 A graphic I created in Adobe Illustrator. The simple graphic displays more detailed information regarding the even along with space for a stamp and address block to be handwritten in. There is a front side to the postcard that you can check out and I have uploaded the Baby Shower Announcement Postcard Back Adobe Illustrator File so that you can see more of what I did.

We were preparing for a baby shower and had both of our families and friends from all over to celebrate at Tony Romas restaurant and to give us baby gifts because we didn’t have anything. As we were celebrating this new upcoming life, we had no idea that Minnie’s mother would pass away in a little over a week. You can check out the photo album, It’s a Boy! Family & Friends Baby Shower, on Facebook. During the baby shower, we had everybody participate in an activity where the guests wrote pieces of advice on a note card for Minnie and I. I really thought this was a cool idea, and wanted to find a great way to share them with everybody. I made a picture collage and a flash object. 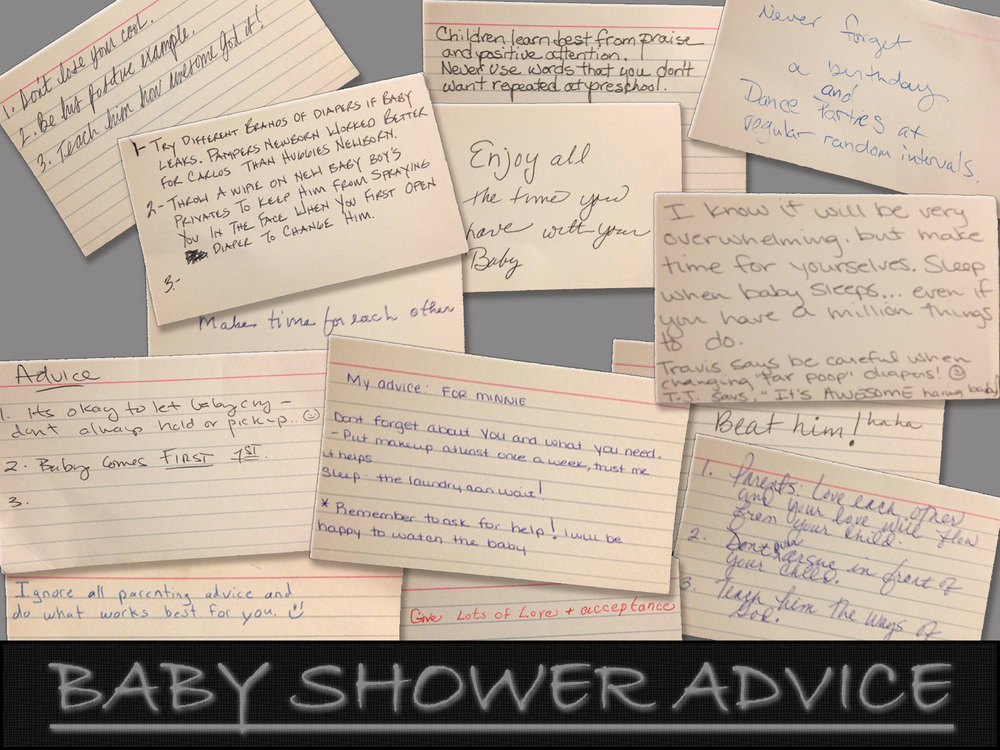 This is a collage I made in Adobe Photoshop of the various advice cards we received from our guests we used as an activity during our baby shower. You can also see the Facebook album. It was inspired by playing around with Google’s Picasa Program I realized that I couldn’t make all of the changes I wanted to, so I ended up making it in Photoshop. The Photoshop tools I utilized were pretty basic. Over all of the individual cards, I added a stroke, some inner shadow and some drop shadow. To add a title to the picture, I used a square shape with stroke and pattern overlay. The text of the title just has some drop shadow and utilizes Bradly Hand font. I’ve also uploaded the PSD file so you can better see what I did.

The day after the baby shower, Teresa Garcia, Minnie’s mom went ended up going back to the hospital. She had fallen a couple of weeks before, but had not been improving even under her doctors care. While there was a lot of different factors and things that happened, all of which I’m not going to share here, her mother ended up in the Intensive Care Unit at Kadlec Hospital being sustained by life supportive machines. For over a week, Minnie was at the Hospital all day every day with her family and friends. After I would get off work, I’d head to spend time at the hospital too. This gave us a lot of different things to think about and consider.

She and her family had to make decisions about what quality of life is and what her, Teresa Garcia’s, desires would be given her living situation. It was not an easy week with a myriad of other things that came up and difficult situations. Last Monday (10/22/12) the family made the decision to take Minnie’s mother off of life support and she passed away several hours after that. You can see her death notice and her obituary in the Yakima Herald.

I took the rest of that week off to be able to be supportive and to help with the arrangements. During this time, we were asked to move in with her father and help to support him in Prosser Washington. We packed up all of our stuff and put two thirds of it into a storage unit in Pasco and moved the rest of it to their ranch. This week, I’ve been back a work but it’s been hard to catch back up. Other then moving and all sorts of other crazy stuff… I also got my wisdom teeth pulled (all four of them).

Some creative writing using the last 27’s words of the day from the Look Up app to talk about the current COVID-19 pandemic.