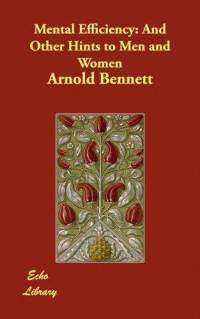 My mom and I have a long tradition of listening to books on tape (well, really I guess they were CD’s mostly) when we would travel. When Minnie and I were driving back from Olympia this weekend, we continued this tradition. We listened to Mental efficiency, and other hints to men and women by Arnold Bennett. Really, I think it is more of a collection of essays, but he has proven to be a timeless writer even with more than 100 years between its first being published and now.

Arnold Bennett was an English journalist and author who died in March of 1931. He wrote on a great number of different topics, and at least with this edition, his very British sense of humor is displayed magnificently.

The book starts out with an article he wrote about mental efficiency, asking readers how we can train our minds similarly to how we would train our bodies. He then includes some of their own responses along with his own proposal for rectifying mental degradation. He even gives some specific, as he calls them, mental calisthenics. These include writing a diary, writing a journal, contemplating about deep issues, reading and responding to what we have read (a part of why I figured that I should respond to this work in particular), and other activities. The rest of the book seems to be taken up with his own contemplation of some of life’s own issues. These issues pertain to marriage, success, books, and contemplation.

His section on success was also particularly interesting. As he did throughout his book, he used a number of partially well put together analogies to give thought to his points. He described one form of success as though it was through a game of roulette. This is a description that I find highly beneficial. He argued his case only a very small minority obtained acclaimed success due strictly to talent. While he did not directly relate this to the mentality of pulling oneself up by their bootstraps, I find it apt at arguing the same point. In my field of work, this is something that I frequently see. The fact that many people are trying to make it, but it’s really often times like a game of roulette whether or not they make it.

All in all, I would say that it is a good and timely read. It is a book that you can download for free from Gutenberg Project or even find a free audio book download as I did.