Overview of the Book 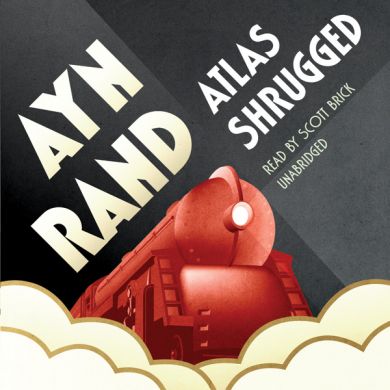 The Audiobook Cover for Ayn Rand’s Atlas Shrugged. You can find it on Amazon and listen to yourself. I uploaded this graphic for my blog post An Allegory of the Free Market and Capitalism, Atlas Shrugged Book Review.

Ayn Rand’s classic Atlas Shrugged (Amazon || Google Books] is an enthralling novel with lots of conservative political implications done in the opposite of brevity. My friend Ami, carried this book probably weighing at least five pounds across most of our Jaunt Down to South America. I wondered at the time why she continued to pack the heavy book in her bag and heft it onto her shoulders every day. Even without having read the book, it sparked a number of interesting discussions between us as she leafed through it’s pages.

I decided that it was finally time for me to go through this highly acclaimed book. Instead of trying to take the time to read the book word for word, I decided to purchase the Unabridged Atlas Shrugged Audio Book and listed to it on my drive back and forth to work, and as I got further into the story I found myself listening to it at times I should have been sleeping.

The book examines in my experience, rarely for the genre, mainly a dystopia coupled with a remnant of a utopia. It explores a great number of topics through its story format and it is nearly impossible to miss the conservative political leanings of Ayrn Rand. It takes place in a world where the world has apparently become communistic (i.e. all of the countries are labeled “The Peoples State of Germany” [or fill in the country name]). In this dystopian world, the main protagonists (business men and women and industrialists) are disappearing from the world. The struggle mainly follows Dagny Taggart, the vice president of a transcontinental railroad and her never ending struggle to find “men of ability” and produce in a society of “looters.”

Throughout the novel, it addresses a number of different topics through its story format. Mostly indirectly it seems to me to address communism verses capitalism through a number of smaller topics. It looks at education and philosophy, victim and what Hank Rearden refers to as the sanction of the victim, government and business, and property rights.

Discussion of the Book

I found the novel to be particularly enthralling. While, I don’t necessarily believe the argument is a based argument as the author appears to lay out. The is most undoubtedly coming from a very right and conservative leaning stance. If the book can be considered an argument for capitalism, limited government, and social welfare I don’t believe that it lays out a fair argument. In it’s entirety, there is not one logical non-obtuse antagonist. The novels puts the concepts of social welfare and progressivism out like a straw man type of argument. All of the antagonistic characters are all quite deft and you just have to hate them and be rooting for the industrialists and business people. I wouldn’t disagree with rooting for these people, I truly do and have no problem with them.

For my own political leanings, I tend to describe myself as idealistically conservative but pragmatically highly liberal. You can read more about why my political stance is like this from something I wrote while in South America, Out of Trinidad & Tobago and into the New World of Venezuela.

One other thought about this this book, although I could and probably should write a lot more because there is so much in there, is about the concept of people with ability. There is a lot of argument about people of ability in the book and that it is not right to force them to pay for the “looters” who are without ability. All of the antagonists in the book are truly made up of people who could, with work, be people of action and ability it would seem. The book doesn’t address one bit societies need to help the most helpless and those who don’t have ability, especially those who are disabled. In my work, more and more, I find myself working with people who can not work (by definition for our services, somebody must not be able to work or must be on TANIF). While I do have clients that I could see doing some work, their disabilities make them highly undesirable for an employer and anybody that would hire them would have to make many sacrifices to keep them employed and I would imagine that they wouldn’t be financially productive for the company (don’t get me wrong, I’d love to have some employers like this… but it’s pretty uncommon). But then, I also have clients who I can’t really imagine doing any work currently due to their mental heath disabilities. They tend to be homeless, and have major psychosis that would extremely limit their ability to even do a job, less likely have clean and presentable clothes. I wonder in Rand’s utopia of Atlantis, who takes care of these people?

All in all, I would highly recommend the book, or the audiobook if your like me and have a long commute (although it was pretty pricey at about $30.). If you’ve read it, let me know what you thought, because I really only glossed over some major topics of the book and it’s such a long and deep piece of writing.

Pixar’s Soul an Interesting View of States of Flow

Another great Pixar movie that made me think, so sharing some connections with the topic of flow.