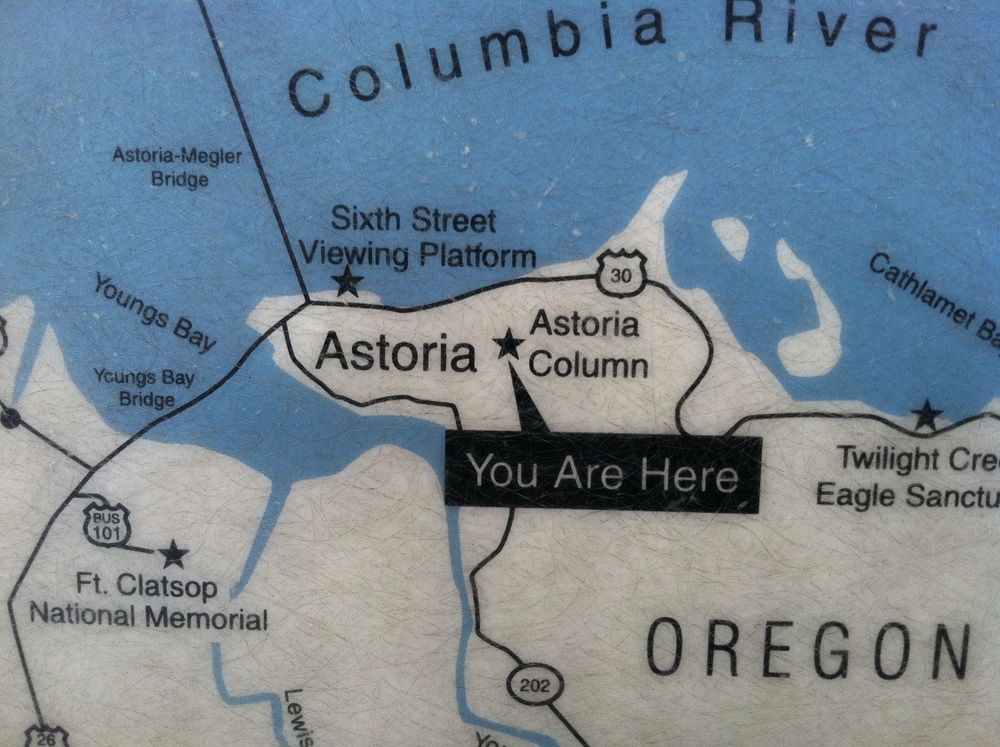 The “you are here” sign for Astoria Oregon’s Column.

This Thanksgiving has been pretty spectacular. It has been the first that I’ve split my holiday, and it has worked out really great. Minnie, my mom, and I started on Wednesday (I took the day off from work) and headed to Long Beach Washington to meet up with the rest of my family. We got to introduce Minnie to my mom and my tradition of listening to books on Tape as we go on road trips. It’s a great way to pass the time. We listened to Daddy’s Little Girl by Marry Higgins Clark which is turning out to be a pretty great book (we should hopefully finish it on our way back tomorrow. On the way we stopped and had lunch in the Dalles and got to look at many of their beautiful murals (you can check out Fun, Fundraisers, & Thanksgiving 2011 Facebook Album for all the pictures from the trip and some other stuff before). On the way we stopped in Astoria. While this is where The Goonies and Kindergarten Cop were filmed, we didn’t end up finding any of the shooting places. We ended up checking out the The Astoria Column and climbing to the top of the 164 steps. I will say that we had to go past a road closed sign (which my mom said she didn’t see) and got told to leave by a city worker because of some “dangerous trees.” For some reason my calves are still sore from the climb.

We made it to Long Beach, and met up with the rest of my family. My aunt and uncle let us use some of their points at the The WoldMark Club Long Beach. It was nice, although it was much nicer to spend the time with all of my family. My extended family (aunts, uncles, cousins) are all close and we get together several times a year. Actually, speaking of Thanksgiving, that is something I’m super thankful for. We walked along the beach, played games, and talked. It was also the first time I’ve ever brought a girl to meet the rest of my family. It was pretty cool, and they all really loved Minnie.

Minnie and I decided that we should also see her family, we are here in Puyallup. Again, food, family, and fun. On our way over here, Minnie sent us on a detour to Aberdeen. I keep telling her that I’m going to fire her from being a navigator, but I think detours allow for new adventures. We found a small memorial to Kurt Cobain (a park with some signs) because he grew up there. It was hard to find, and really small. It but it was interesting. It was just unveiled recently.