I have been making a determined effort as of late, to push myself to read more. I try to spend some time in the morning reading my devotional (My Utmost for His Highest by Oswald Chambers) and my bible first thing in the morning with my morning coffee, news, and cigarette (yeah, I know that isn’t conventionally acceptable to say at church and my mom keeps telling me I need to quit). I have also been reading at night before going to sleep. It’s been a great habit for me to get into. The latest book that I have finished has been The Irresistible Revolution: Living as an ordinary radical by Shane Claiborne (2006).

I might add, that by just finished I mean as in this morning unlike Mitt Romney is chided by Jon Stewart, see video below. There have been a couple of books which I feel have been very transformational to me. In reading Claiborne’s book, I think that it will fit into that category. The back of the book describes the book as being invited into a movement which begins in our hearts and extends though our hands into a broken world. They say that this book with both “comfort the disturbed, and disturb the comfortable.” I will say as I have been comfortable, I have been disturbed some by my comfort through this book.

One of my co-workers, Jamie, gave me a copy of this book. She suggested as we have talked about purposeful communities and communal living. The idea of community and communal living is something that I have scribed on my heart and something I have longed for. Since being in the Master’s Commission I can remember talking to people about wanting “to start my own commune” (I often phrase it like that to see what type of reaction I will get out of people). While it is not in the scope of this post to lay out the vision that I have (and it’s not to start a cult, so don’t worry) I will try to spend some time not just talking about it, but I will write it so that you can read about it too.

Claiborne is one of the founding members of The Simple Way, as they describe it on their website “The Simple Way is a web of subversive friends, conspiring to spread the vision of ‘Loving God, Loving People, and Following Jesus’ in our neighborhoods and in our world.” It is communal living that happens in Philadelphia.

I think one of the reasons that the book disturbed me so much (in a good way) was because of the issues that it touched on. Claiborne seems to sum up their movement as the following:

We are just trying to discover a new (ancient) kind of Christianity. We are about spreading a way of life that exists organically and relationally and is marked by such a brilliant love and grace that no one could resist it. – Page 348 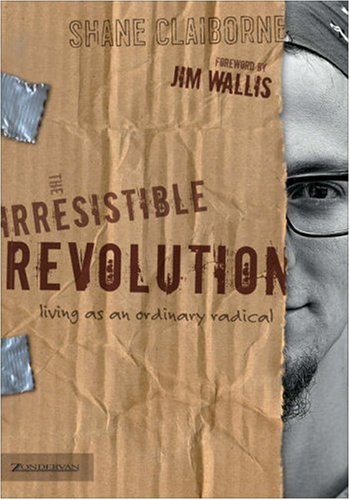 Book Cover of Shane Claiborne’s The Irresistible Revolution: Living as an Ordinary Radical (2006).

While this is simple he discusses how this relates to parts of our life in way’s I hadn’t thought of before. He describes in real terms what it means to love our enemies and gives the strongest case for non-violence I’ve read so far. He described what it means to live with and love the poor. When I’ve thought of being in a community, it didn’t change my desire to still be a part of the middle class even though I’ve always thought the community should be located in the ghetto. He describes about whether or not he should have health care (when people around him aren’t able to afford it). He describes about church tithes and how the church shouldn’t be using the majority of their funds to pay for buildings or for workers but should be giving to those in need. All differences in topics I haven’t taken time to critically think about.

I would highly suggest the book. I will say that it is very Christian oriented, but even if you aren’t a believer and are what he Claiborne describes as an activist I think it would be a great read. You can find it on Google Books and Amazon or their own website.The other thing that it made me hungry for was a difference in my profession. I love my clients that I work with, but I have been becoming fed up with the bureaucracy that is present to work in mental health. I long for living and working in ways that he describes. He describes that their daily living looks like the following.

It’s a little easier to describe an ‘average’ week. We have prayer each morning (at 8am). Then we dive into days that are filled with things like hanging with friends in the neighborhood or folks living on the streets, helping kids with homework, and helping folks get to appointments. We’ve got some lovely gardens and a little neighborhood thrift store. Most of us work jobs part-time and that frees us up to do other stuff we don’t get paid to do, but love. Activities and programs change from time to time, but we share food with lots of families, and try to be good neighbors. We have dinners together each week, and we have a Sabbath one day each week where everything rests. There are times where we have other things that grab our attention around some of the systemic injustices around us. Right now we are working hard to end gun violence on our streets, and to create some local jobs and more stable housing for folks. It’s not always sexy. In fact, we had some visitors that lived here for a week, and at the end of it we asked them what they learned. They said, ‘We learned it’s not that spectacular, and that we can do this right where we are.’ That’s a good word. – The Simple Way’s FAQ’s Page

It made me hungry to not be worried about if my productivity is high enough or if I’m meeting my timelines for meeting with clients. To just be free to do what comes up and what needs are present. To not be worried if my clients know each other and their confidentiality might be broken. To not have to call them my clients, but to be a friend to those in need, not just a worker. I recently told one of my co-workers that I think if I got laid off it would be a good thing. Then I could go and do something more radical. Maybe join the occupy movement or something.

Completion is Not Final, It’s More of a Phase [Link Post] Permalink

Medication can help us to make it through really challenging situations

The Breaking and Breakthroughs in our Lives [Link Post] Permalink