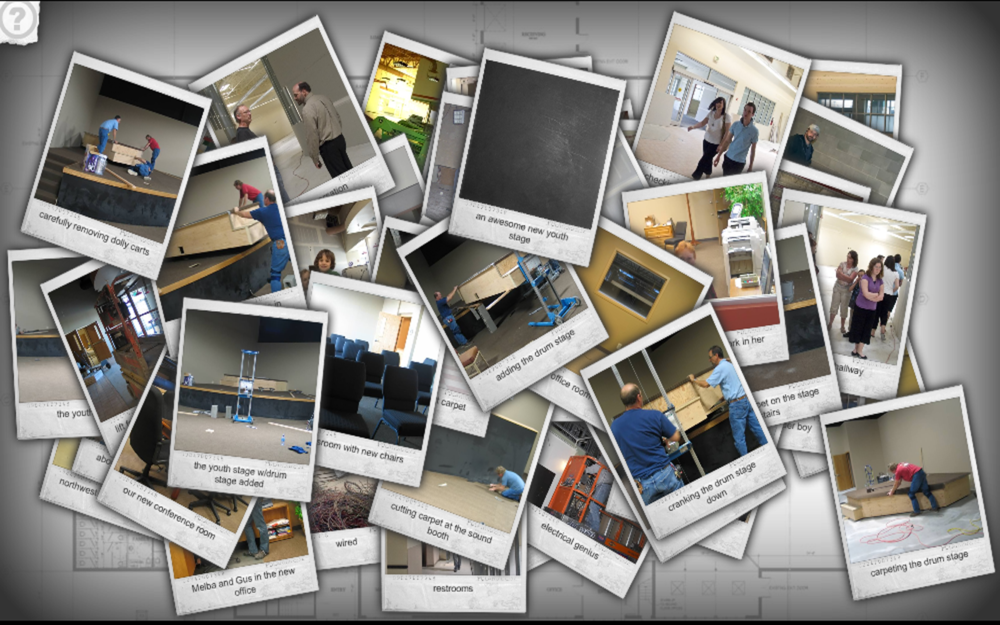 A screenshot of the Victory Faith Fellowship of a collage of photos regarding their new church facility.

My church, Victory Faith Fellowship, has been undergoing a lot of changes lately.

One huge leap of faith that we have made is in purchasing a new building. It has really been an amazing story of our church following after Gods dreams, which are bigger than anything that we could do ourself. It has really been a great ride so far. This Sunday, we will have our first meeting at 2024 N Argonne Rd.

My Website has Been in Every State, Plus Two 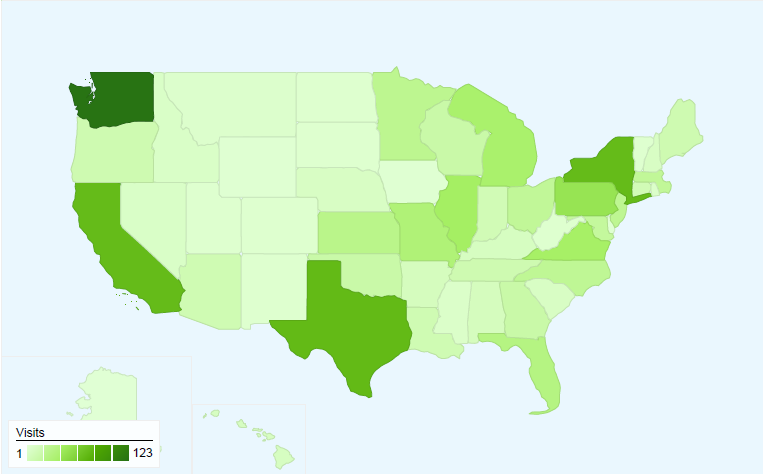 Checking out my Google Analytics this morning, I realized that my website has been visited by people in every state this previous month. It’s like I can travel around the country (really the world for that matter) every month. My Analytics US Map Overlay tells me that I’ve had visitors from 52 states. One of the extra is unspecified and the other is Washington DC. I thought thought that it was a pretty cool thought. Also, it’s pretty cool that I got 1,412 visits this month. That number is pretty constant too. Someday I will probably upload monthly reports so other people can follow my traffic. 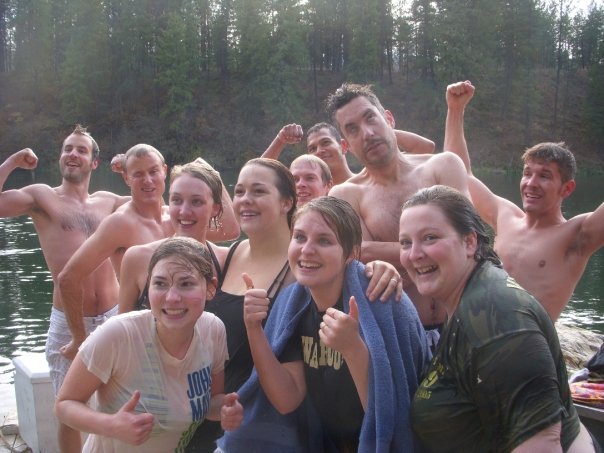 Who Knew Ordering Pizza Could be Cool 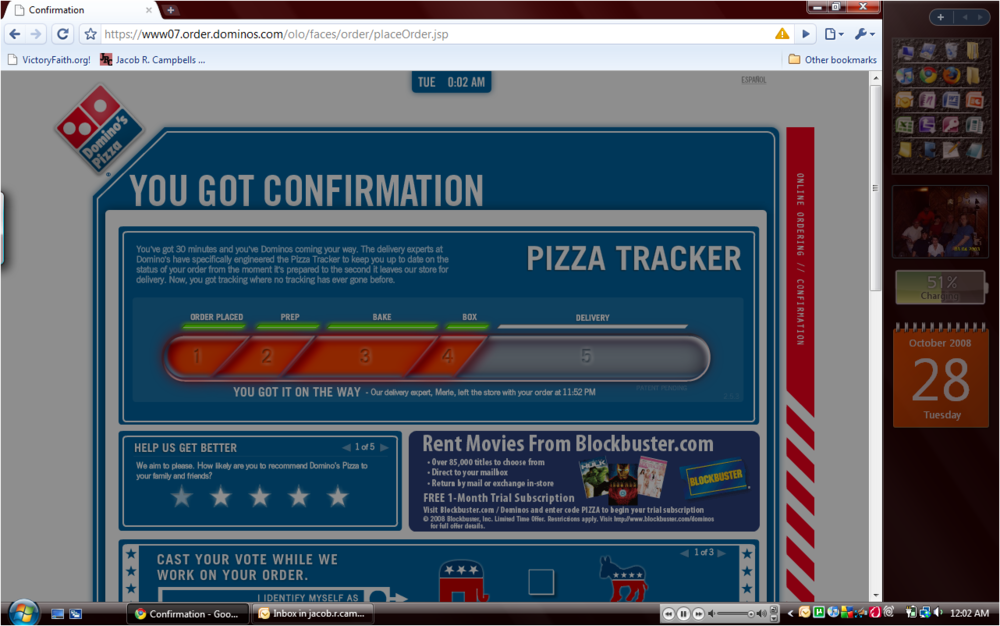 The pizza tracking page on Domino’s

I got off work tonight, and was hungry. I don’t have any food in my house, and am in desperate need of going grocery shopping. For some reason, this didn’t sound like a good idea at almost midnight when I got home. I decided to order pizza. Looking up dominoes online, I found their order process super easy and kind of cool. I just had to enter information, and it placed my order. The confirmation page (see below) told me who began baking my pizza and when, and the same for putting it in the oven, boxing it up, and leaving for delivery. That’s pretty sweet. Probably more information than I need to know, but still very cool to know.

Now You Can Read What I’m Reading

One of the benefits of working in the afternoon is that I have time to take my mornings slowly. I tend to sit outside and and drink a cup of coffee and read the news most mornings now. I read my news from Google News. I have made several personalization to the news that I read, and thought you might be interested in checking them out. You’ll see that in the recommended for me section there is a lot of information regarding technology and the election. I tend to read these a lot. I also have a section that searches the news for all the stories that are connected to social work and related material. I also have Googles local news for my area code and an addition of local news that isn’t included in their searching (the Spokesman Review, and the Easterner my schools newspaper). I hope this is interesting for you.

I must say that I am slightly biased as to which online products I like for various activities. I recently came across Google 2008 U.S. Elections. This has many different Google products that bring up various election features. One of these that I think is very cool is the Google Maps Elections ‘08 Map Gallery. One example of the maps that are available is Candidate Queries Map from Google, but their is a host of other ones listed in the gallery.

Things Lost on the Trip 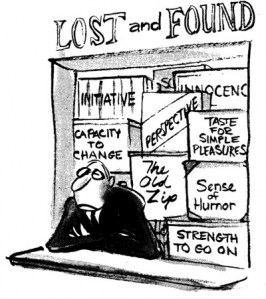 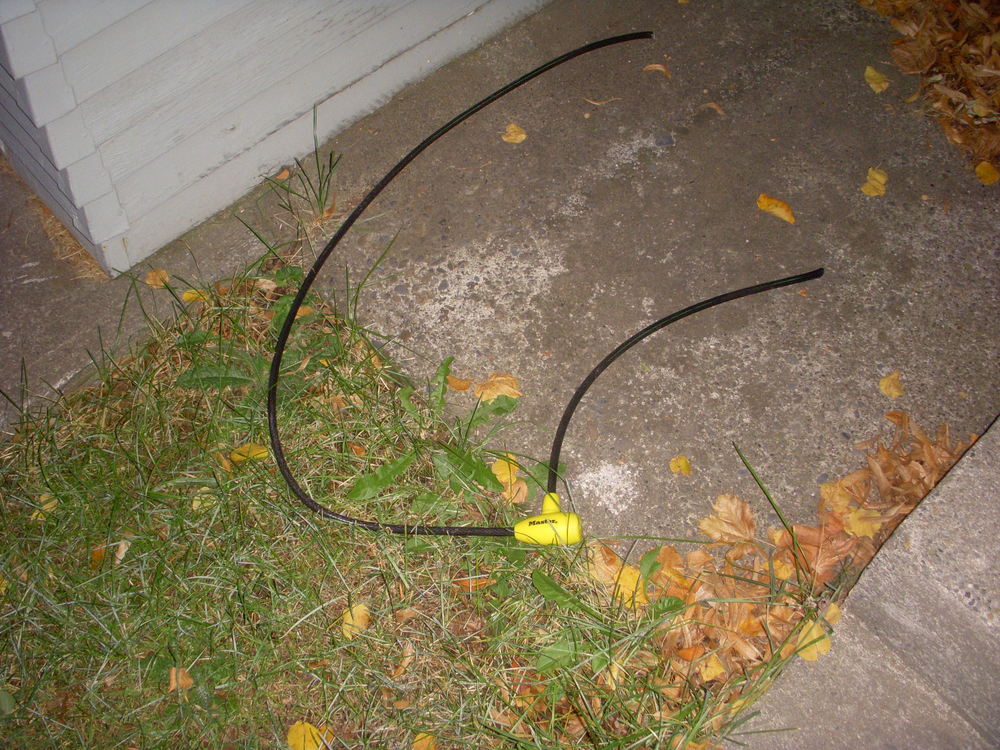 Currently I am sitting in the Airport at Heathrow in London… and absolutely huge airport. But to catch you up on events, I have about 18 minutes until it’s time to go and catch a plane home. So this post might be trying to fit a lot in, with a very short time.

I loved Krakow, except for all of the rain. All of my clothes where dirty (also, sorry about any spelling mistakes in this post… the computer I’m using has some stupid browser, so I can’t do much) so I wondered around in shorts and flip flops in the cold rainy days in Poland. I finally broke down and bought a new pair of pants too from the local mall. The last day that we were in Krakow we made a expedition to Auschwitz.

I went to the Holocaust Museum in Washington D.C. years ago with the Master’s Commission. It was probably one of the most impactful places that I’ve ever been. It was really quite a different experience to actually walk on the ground where so many people were murdered. We also went to Birkkenau, where all of the crematoriums were. The whole place just had an airy sad feeling to it.

Budapest and Spa’s at 2am

Budapest is one of the few cities that I’ve been to that I really could see myself living in. I would highly recommend if you are making a Europe trip to go to Budapest (and lots of Eastern Europe). There are lots of great sites to go and see. We saw a church built into a rock cave (cave church), climbed a hill with a spectacular view of the city and cool little shops. There are many different Thermal springs in Budapest, and we went to one and stayed there late into the night. Really it was such a great place, that we ended up staying longer than we planned and buying a second plane ticket.

When traveling it is a great idea to be very through when making travel arrangements. For example if you buy a ticket going to the airport, you should know if it is the only stop or not. We ended up going to a town in the country of Hungary instead of the airport. We met the nicest young couple home for the weekend from University. They took us to their parents house, made food for us, drove us to the train station and even waited for the train to leave us. They were an amazingly hospitable family and was a great experience.

London only for Three Days

London is a huge, world class city. It took almost 2 hours to get from one side to the other through the underground. The sites were beautiful. I will upload pictures when I get home. We took a free walking tour which was interesting and the Australian leading it was hilarious. It was a great stay, but way to short. London really needs at least a week to do it any justice, but I was glad for the three nights.

I stand here now, needing to leave for my plane (I don’t want to miss this one, it wouldn’t be a good idea). I am sad to know that I’m going to be stopping traveling, but happy to come home and see friends and family. I hope to see all of you soon.